Red Shift: First "Game Changers" for Disruptively Accelerating Diffusion in Innovation Ecoystems? Where is Your Story? 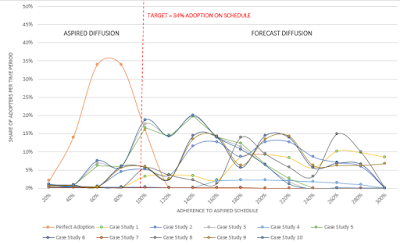 Dear all - time to start digging into the innovation diffusion ecosystem dependency model!

With the high level capture and evaluation of 10 diffusion case studies now completed we begin a process of exploring the acceleration factors for innovation diffusion more deeply.  The aspiration is to gather a few dozen more case studies and then to suggest a first dependency model in the fall - and submit that for publication to the Journal of Industry and Higher Education (https://journals.sagepub.com/home/ihe). The dependency model will be the result of a detailed co-variate analysis of case study data, be modeled in Excel and published with a Creative Commons by Attribution Only licence.

The image shows the adoption of the current 10 case study innovations over the course of their planned diffusion compared to what might be a "perfect" aspired diffusion curve on the left. In comparison to the aspired diffusion "wave", the case studies extend right in waves of varying length and amplitudes. The challenge we have posed ourselves is understanding what factors will contribute to shifting these patterns towards the aspired wave. Indeed how can we "narrow" the aspired wave to last only a "heart-beat"?

At the moment we are path finders, or rather the finders of innovation diffusion paths for case studies. As our knowledge of the beaten paths grows, we can move to creating the optimal path, the fastest path that is possible (respecting that there is probably also an optimal diffusion speed which may need to last longer than a "heart-beat".

Path finding with small amounts of data has many caveats of course and perhaps, besides the ongoing and intensifying journey of co-variate analysis for the factors being captured, there is already a key insight evolving out of the many discussions held - the game-changing factor of having the innovation web ACCELERATOR roles (investor, influencer, super user and moderator) populated from the start with individuals who consider the diffusion as urgent, place priority on the diffusion in their daily work, are motivated, domain competent and highly collaborative.

At some point we will then be able to move from finding trodden paths to creating new ones, new paths that enable the diffusion of innovation from ideation to market saturation in a "heart-beat", new paths that will leverage the game-changers, combine them in new ways and enable this repeatable experience. While the jury is still out on what this will actually look like, I have a deep suspicion it will resemble a Medici effect that can be consciously orchestrated.

While the discussions have all strongly validated the above insight, it is however particularly interesting to note a significant reticense of discussion participants in taking the next apparantly logical step of creating that game-changing "sub-tribe" of accelerators. Maybe reticense is not the right term - perhaps it is more a struggle with understanding how to achieve this, or perhaps even more fitting, a lack of willingness to "let go" of ideas in order to enable the shared ownership and passion that drive this sub-tribe to highest performance. Diffusing innovation from ideation to market saturation is a "team sport" where performance is driven by interdependent behaviors!

In respect to "letting go" a specific enabling action is the co-creation of funding proposals - regardless of what technical readiness level or market adoption an idea might have. This is a pragmatic and effective way for creating the path to rapid diffusion to market saturation. The question begged however is why the inventor seems to struggle to venture down this path? The question also moves us from describing the state of diffusion to trying to understand the motivations and biases of participants of individuals assuming various roles. Indeed in many of the case studies, the inventors try to assume / own all roles which consistently drives their diffusion curves to the right. "One Man Shows" are absolutely fine - they will just not reach the late majority of the market - which is fine as well of course.

In summary perhaps the most fundamental game-changer "found" to date appears to be the motivation of the inventor to reach the late majority of the market - most seem to prefer to focus on the innovators and are happy with that it seems.

Remember the "left" curve is the "optimal" curve, if we condense it to the minimum "period" it becomes perhaps the "Medici Curve" - this reduction in wave length (accompanied by an increase in amplitude since the goals of market saturation remains) might be called a "Red Shift" based on the Doppler Effect paradigm?

So.... where is your "path" and how do we "shift left"? Let us know if you would like to contribute a case study :)