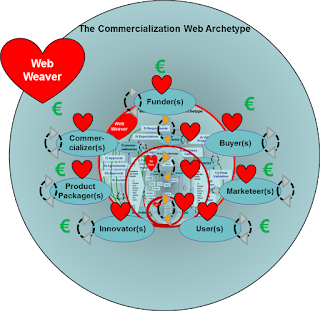 The final innovation web archetype of relevance is the “commercialization web”. The commercialization web archetype involves bringing the product or result to the market through production and distribution. It consists of tangible and intangible exchanges between the researcher and / or innovator, the intended beneficiaries, the research community, the practitioner community, the product packager, the commercializer and then "closes the circle" through exchanges between the commercializer and the beneficiary. As with the description of the research, socialization, and market validation webs only key intangible and tangible exchanges and dynamics are shown, whereby the web weaver continues to facilitate / serve the innovation web in order to support maturing it to those transition threshold maturity levels which are required for value generation.

In this respect the initial focus is to ensure the research, socialization and market validation webs continue to operate effectively including the relevant collaborations within the roles themselves. The web weaver plays an intrinsic role in maintaining this momentum (similar to “spinning plates” if you have ever seen that circus trick). The web weaver is then also crucial to serving the “whole” sets of nested innovation webs in order to drive the creation of especially financial capital for the participants of all roles.

This nested system of innovation webs thus strongly resembles natural phenomena such as bee hives, flocks of bird and fish swarms in their behaviour. Indeed they are all the result of complex DNA structures guiding their developments, evolution and behaviours as a whole. The overall innovation web is thus a nested complex adaptive system, served by web weavers.

ENTOV-HVM aspires to contribute to the question – How can we accelerate them to a disruptively fast pace?

Maybe it is the “transition” web archetypes that exist between each of the innovation webs which are responsible for the transformation between the different innovation web stages. This , however will also be part of the future exploration. 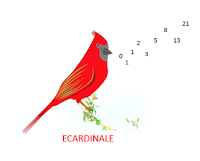 Dear all - after exploring opportunities for the project idea we created in Zweibrücken you can now find the first draft proposal here - https://innovation-web.eu/ecardinale-20200302 .  This project proposal is submitted by the xxx representing the Open European Network for ENTerprise InnOVation in High Value Manufacturing - ENTOV-HVM in response to the EIT Manufacturing pre-call guidelines for activities to be executed in 2010. The pre-call submission date for the sketch is March 30th and you can fine an example of what a "good" course deliverable looks like at  https://innovation-web.eu/online-course-example-20200303 . ECARDINALE aims to help strengthen Europe's innovation capacity and at fostering innovation in higher education, business and the broader socio-economic environment of the EU helping to disruptively accelerate the value creation from ideas in high value manufacturing (HVM) ecosystems from ideation to market saturation. The aim will be achie
Mehr anzeigen

The speed with which ideas evolve through the innovation web archetypes depends upon 12 (twelve) interdependent variables: Resilience, Reciprocity, Agility, Value Creation, Perceived Value, Asset Impact, Cost Benefit, Sequence, Structural Integrity (Density), Structural Dependency (Centrality), Number of Participants and Stability. These variables are explored in a series of blog postings and will be completed by the presentation of a parametric model describing their interdependencies and permitting the simulation and analysis of the overall innovation web evolution process, including the impact of relevant “interventions” needed to accelerate the idea across the diffusion of innovation curve. This posting explores the variable “Agility”. Agility is an important indicator of a network’s ability to respond to changing external conditions. It is also an indicator of how easy it is for any participant to reach that participant who might be able to solve a specific problem. The cal
Mehr anzeigen

ACT-NOW! The Innovation Journey - The Inaugural Experience - Some Feedback 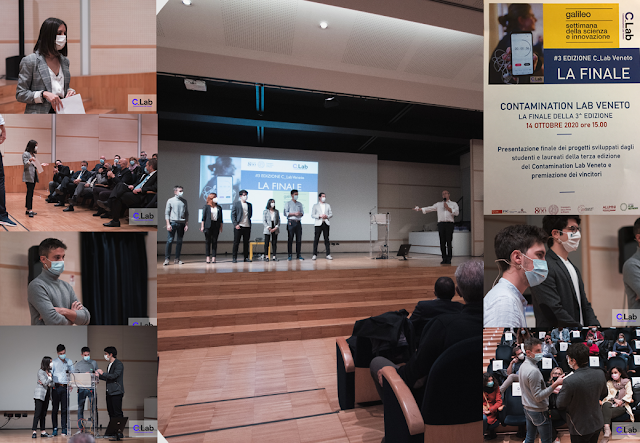 Dear all - text alone cannot share the actual experience of an "Innovation Journey" event, but unfortunately, we have to make do with that for the moment. We can share videos ( https://www.youtube.com/watch?v=qSYeXtsr8i4&t=707s and https://www.youtube.com/watch?v=P4IQsbpTphI&t=766s ), share pictures ( https://innovation-web.eu/act-now-the-innovation-journey-experience ) and share feedback from the participants (see below and anonymized to protect the innocent from the perfect memory of the Internet). In the end however, there is no replacement for going on the journey yourself ; so, do reach out to arrange YOUR experience! In any case - some feedback. The Innovation Journey is based on a small story of how innovation really works (see “A Really Really Good Idea” at https://innovation-web.eu/about ) and the workshop is itself an innovation journey – a safe simulation of what the big journeys of change truly look, feel, smell, sound and taste like! The Orchestrator
Mehr anzeigen